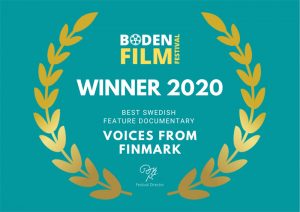 Boden Film Festival didn’t have any public screenings because of the corona virus. Only the judges watched the films and mine was one of the winners. It would have been nice of course to actually attend the screening and meet the audience and other filmmakers, specially when I won an award, which doesn’t happen that often*, and because this was in my hood, but this year things work a little differently, if at all.

I was interviewed for the local, big morning paper, NSD, and when I was asked to provide a web address, I directed them to my Swedish film site Slowlife Film. A site I hadn’t looked at for a couple of years so I needed quickly to make a new post about the film and I thought it was a good idea to update WordPress and all the plugins at the same time and, lo and behold, the whole site turned into one line of error code…
After I managed to fix that, soon a new problem arrived. The video players didn’t work anymore! That turned out to be a glitch on YouTube’s part not accepting external players. Maybe. But at least now it works again. For a while I was afraid I would need to do something with the API. And what’s that, you might wonder, and so did I!
And haven’t logged in for a couple of years I found some spam messages that needs to be deleted. 40 000…
I disabled the comments.

For the last weeks my Youtube statistics have gone up a lot and I don’t know from where much of the traffic is coming from. “Direct” or “unknown” isn’t very helpful. But hey, it’s okay, just keep it coming! And not only that the number of views are increasing. The time each person is spending watching the the video is increasing even faster! A similar thing happened when I was in Japan this winter and it lasted for a month. That time all the viewers came from Japan, this time it’s from America. In Japan it was mostly YouTube suggestions but now I have no clue.

Edit: all the new traffic is coming from YouTube suggestions. Before YouTube knows how to categorize the traffic correctly, it brands everything as “direct” or “unknown” it seems. I would have guessed that all the referrals come from videos that has something to do with Japan but the best performing video sending traffic my way is about brain health.

Other people too are making great documentaries and here is one I would like to recommend. The real Castaway at Top Documentary Films.